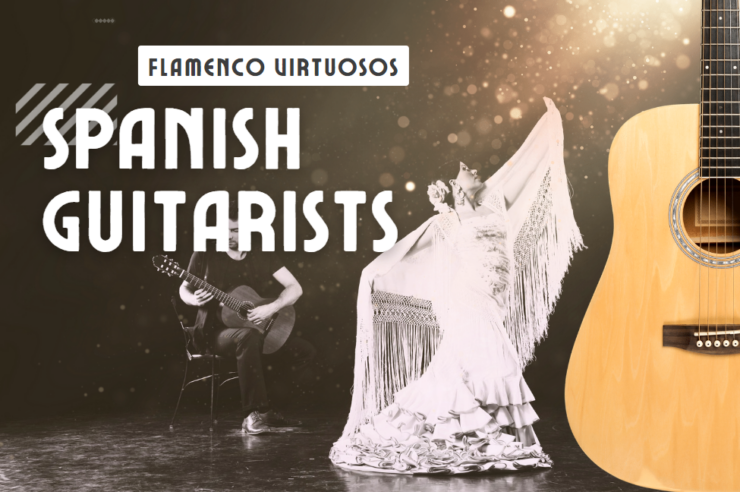 Spanish guitar delivers beautiful and vibrant music and requires quite a lot of skill and time to master playing. It has a mellow and comforting sound that only some performers are true virtuosos with, so today, we are going to talk about the best Spanish guitarists.

The range of musical diversity in Spanish guitar players is pretty vast, and listening to them play is a real treat for any music enthusiast that enjoys this type of sound. However, once you scratch the surface of the Spanish guitarists’ scene, you will notice that it is so much more than just flamenco behind it. In this article, we will cover some of the greatest names from this scene, so let us start without further delay.

Andres Segovia is one of the most influential classical guitar players. He made a name for himself by putting his specific spin on baroque and classical music, which, in a way, reinvented the genres with Segovia’s special trademark on it.

He was a true virtuoso, and his personality radiated through his music and incredible God-given ability. Segovia’s live performances were about the atmosphere and showmanship as much as they were about his playing. His signature style of strumming and plucking with his nails really opened up the range of his music and influenced countless players worldwide.

Jose Fernandez Tores, mostly known as Tomatito, is one of the few guitar players on our list that is still active nowadays. He is an author of fantastic Grammy Award-winning songs, and his Spanish Roma flamenco style is truly impeccable, which made him such a great name in the music world.

Throughout his career, Tomatito released six albums and was a part of numerous collaborations with other musicians as well. Like so many greats before him, Tomatito blends flamenco with jazz and other styles that add that specific and mellow sound to his arsenal.

Francisco Gustavo Sanchez Gomez, or Paco de Lucia, is one of the most influential guitarists, producers, and composers to ever set foot on the stage. He made a name for himself for his incredible flamenco style, which was, back in the day, promoted as a new wave of Spanish guitar music.

With that said, Paco de Lucia did not only stick to flamenco music, as he famously implemented jazz and classical music in his style as well, which was a huge influence on the likes of Eric Clapton. It is safe to say that he made a huge mark in the music world and that his style moved numerous musicians to push their limits further.

Alvaro Urquijo is yet another musician on our list that is still active nowadays. He was born in Madrid on June 22, 1962, and is a highly influential guitarist, singer, and songwriter that made a huge mark on the scene over the past decades.

He is also known as one of the founding members of the pop rock group called Los Secretos, which he founded with his brothers Javier and Enrique Urquijo back in 1980. Throughout his career, he had 17 studio releases with Los Secretos and one release from his solo career. His interesting blend of genres and specific style made him a huge name on the scene and the one you should definitely check out if you are a fan of Spanish guitar.

It is safe to say that Fernando Sor pioneered some of the techniques that make the Spanish guitar and flamenco what they are today. He was a truly versatile guitar player that created amazing flamenco and opera pieces, as well as some symphonies.

Sor was also a huge fan of ballet and wrote the music for a rendition of Cinderella. He was a true virtuoso and jack of all trades when it came to guitar playing, and he is still praised for his exceptional talent, vision, and incredible pieces that are still listened to this day.

Ramon Montoya was a true genius and virtuoso on the Spanish guitar that had a huge role in putting flamenco on the map and rising to prominence in the music world. Through his incredible style of play, flamenco became more than just a supporting role and rose to new heights.

Ramon’s friend and classical guitarist, Miguel Llobet, helped him expand his vision and opened his eyes to the instrument’s possibilities, which he took advantage of in such a great manner. He developed a special technique that implemented gypsy musical influence and made his style a lot richer and more potent.

Vicente Amigo is a Spanish artist born in Seville that is one of the most influential guitarists that brought Spanish music to the mainstream and helped it get even more recognition across the globe. The sounds of his hometown are highlighted through his work and provide that special signature sound he developed throughout the years.

Amigo performed with various artists, including Luis de Cordoba, Camaron de la Isla, and Jose Merce. He is the winner of multiple awards and the shiniest have to be a Grammy in 2001 for Best Flamenco Album. He is still active, and his fans should definitely expect more of his work in the future.

Carlos Montoya is a Madrid native who was at the height of popularity throughout the 1920s and 1930s. He was a highly influential guitar player who helped bring flamenco style across the globe and made it more appealing to modern and mainstream audiences.

He performed a lot prior to World War II when he toured across the United States at large venues for diverse audiences of all ages. His performances did not go unnoticed, and some of the major labels heard his specific sound. Even though Montoya stayed true to the flamenco sound, he implemented a lot of folk, blues, and jazz to his music in the later stages of his career.

Narciso Yepes is widely considered one of the best Spanish guitarists of the last century. His talent was rather obvious ever since he was a child, as he started playing the guitar when he was only four years of age.

His lifelong love for guitar propelled him forward to the career of a world-renowned musician that is highly respected across the world. Yepes made a name for himself and made a huge contribution to the art with his A-M-I playing technique, which utilized three fingers instead of two. This addition brought new depth to the music and brought the playstyle of some of his students to the next level.

Pepe Romero started playing music at a very young age, and it does not come as a surprise since he is one of Celedonio Romero’s sons. He started playing concerts when he was only seven years of age, both as a solo artist and a member of a group.

Romero is known for his fantastic style and amazing technical skills that made him one of the most influential guitar players of the century. He reached such an understanding of his instrument and knowledge of the music that he wrote a book about it in 2023 called La Guitarra.

Spanish guitar provides such a mellow and beautiful sound, and as you can see, Spain has produced numerous incredible musicians, so much so that making the list of only ten was almost an impossible task.

Nevertheless, if you are a fan of classical jazz or flamenco or simply enjoy the guitar sound but have never heard of the musicians we have listed, we highly recommend you play some of their classics, and we guarantee you will not end up disappointed.