This is not the official website of Tom Morello, and we don’t own any of his cultural and intellectual property.

Tom Morello is a famous guitarist born on May 30th, 1964, in Harlem, New York. He made a name for himself as the lead guitarist for Rage Against the Machine and Audioslave but also has some interesting solo projects. In this article, we are going to talk about Tom Morello – The Nightwatchman and about his rich and successful career.

Morello’s career is quite versatile in various aspects, especially in terms of the message he wants to send with his music. He began to perform as the Nightwatchman back in 2003, and it served as an outlet for his political views, while his performing with Audioslave was a bit different since they were playing apolitical music. Today we are going to explore Tom’s career and his artistic performances, so without further redo, let us get into it. 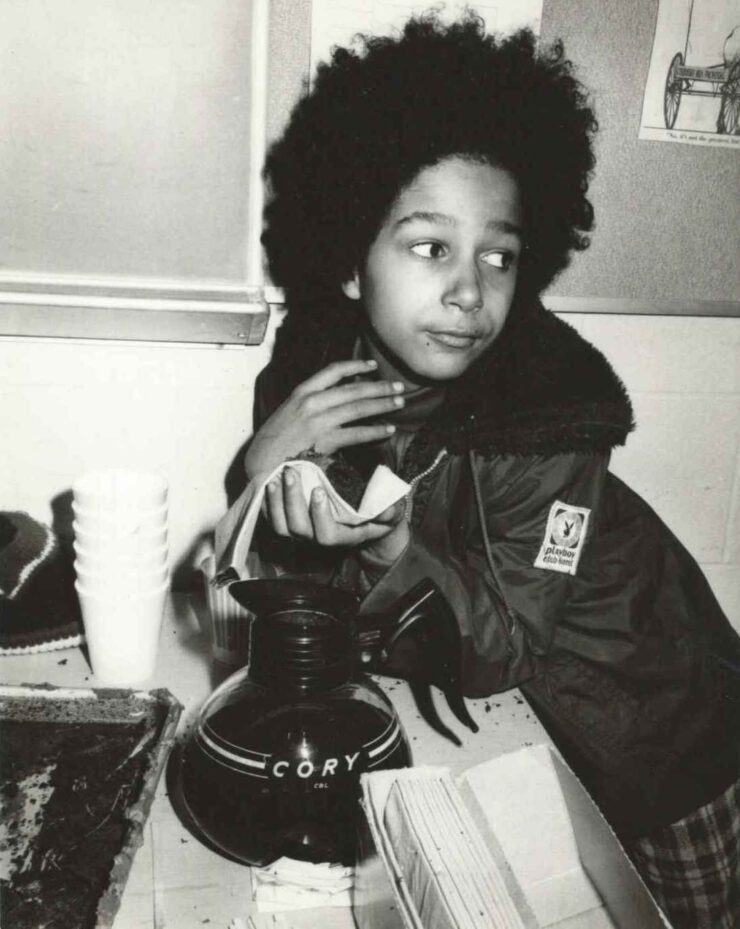 Thomas Baptiste Morello was born in 1964 in Harlem, New York, to parents Mary Morello and Ngethe Njoroge. His father, Ngethe, is a Kenyan journalist and a former diplomat, while his mother, Mary, is an American activist who founded the anti-censorship group Parents for Rock and Rap in 1987.

Tom is the only child and son of an American mother of Italian and Irish descent and a Kikuyu Kenyan father. When Tom was 16 months old, his father returned to his native Kenya and denied the paternity of his son. Morello was raised by his mother in Libertyville, Illinois, where he attended high school.

Tom’s mother was the homeroom teacher for his classmate and fellow guitarist Adam Jones, who later played in the famous band, Tool. Morello showed a lot of love for music in his early life and sang in the school choir, and was also active in the speech and drama clubs. 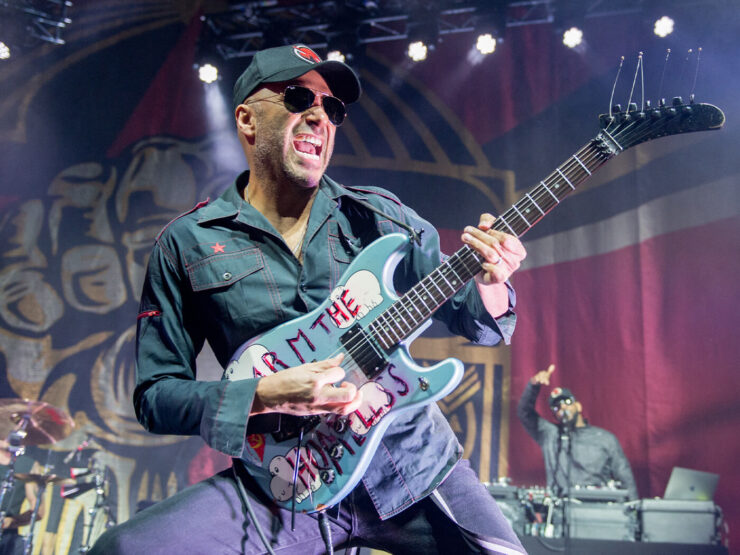 Morello attended Libertyville High School and graduated from it with honors in June 1982. Afterward, he enrolled at Harvard University as a political science student in the autumn of 1982. When he was very young, Tom developed left-leaning political dispositions, and he often described himself as having been the only anarchist in a conservative high school.

He identified as a nonsectarian socialist, and apart from a huge interest in music, he also showed a lot of knowledge about politics and political science, so it did not come as a surprise that he enrolled as a political science student. Tom graduated in 1986 with a Bachelor of Arts degree in social studies from Harvard University. 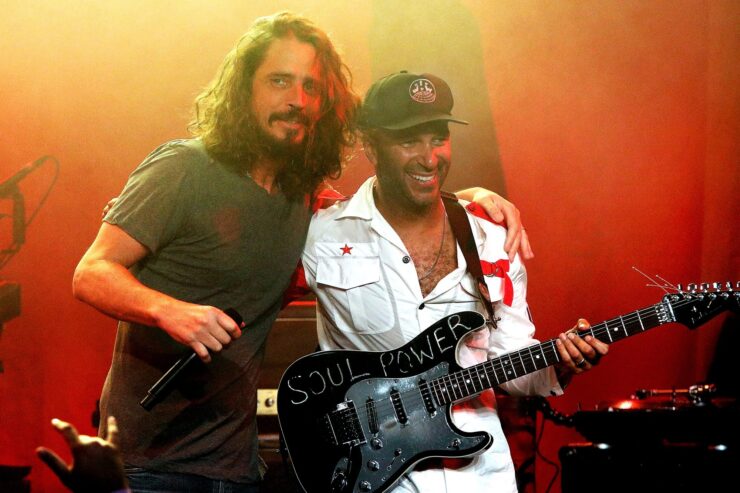 After he graduated, Morello moved to Los Angeles, where he was completely independent and supported himself. However, the graduation did not bring him much, and he often stated that he was unemployable at the time and was starving, so he had to work menial labor, and at one point, he worked as an exotic dancer.

His school classmate, Adam Jones, also moved to Los Angeles, and Morello was the one who introduced him to Maynard James Keenan and Danny Carey, who later formed the band Tool. Between 1987 and 1988, Tom worked in the office of United States Senator Alan Cranston, but this had a negative impact on Morello, as he decided never to pursue a career in politics.

Start of Morello’s Musical Career and His Influences In the mid-80s, Tom founded the band named Lock Up, for which he performed as a guitarist. The band released their debut album in 1989, titled Something Bitchin’ This Way Comes, and it was issued by Geffen Records.

Lock Up disbanded before Morello decided to form Rage Against the Machine in 1991. This band disbanded and reassembled multiple times (1991 – 2000; 2007 – 2011; 2019 – present). He was also a member of multiple bands and side projects over the course of his career, among which some of the more notable are:

As far as Morello’s musical influences go, he was very versatile and a big student of music throughout his life. When he was only 13, he joined his first band named Nebula as the lead singer. The band covered material by multiple bands, including Led Zeppelin, Steve Miller Band, and Bachman-Turned Overdrive.

This was the period when he purchased his first guitar, and he first started playing seriously around 1982. During this year, he formed a band called the Electric Sheep with future Tool guitarist Adam Jones on the bass guitar.

Morello was influenced by various genres and artists, among which some notable ones are Run-D.M.C, Kiss, Iron Maiden, Alice Cooper, Led Zeppelin, Black Sabbath, Clash, Sex Pistols, Devo, and many more. Tom Morello created the identity of the Nightwatchman with a desire to channel political activism in his music after playing in the non-activist rock band Audioslave for over a year. He often described the Nightwatchman as “the black Robin Hood of 21st-century music.”

Morello stated that his music as the Nightwatchman was a reaction against illicit wars and a reaction against first strikes, torture, secret prisons, and illegal spying on American citizens. He also added that the format was inspired by long-time social and political activist and musician Billy Bragg.

He inspired Morello after he first saw him performing at a concert in 1994 before a crowd of 8.000 people in a tent alongside some big rock bands of that time.

On his first couple of albums, the Nightwatchman reminds of Neil Young’s solo days, playing acoustic folk in which the lyrics were front-running and a driving force of the songs. It is something much different than Morello’s work in Rage Against the Machine and Audioslave.

Lyrically, the Nightwatchman project’s tracks are meant to be a tirade against the government and foreign policy, and it was a way to express his political views. His first solo album came on April 24, 2007, named One Man Revolution, and the Nightwatchman first headlining gig was in the June same year at the House of Blues in Dallas.

The second album of the Nightwatchman was titled The Fabled City and was released on September 30, 2008. Two songs from the album, “Midnight in the City of Destruction” and “King of Hell,” were leaked on the Nightwatchman MySpace and were performed during live sets, where the audience had a chance to hear them. 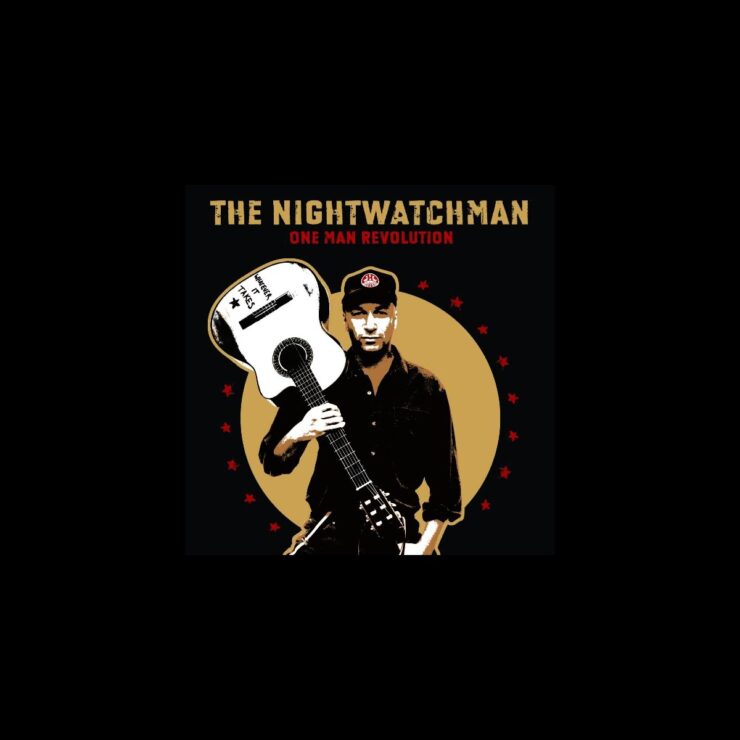 The album was half acoustic, half electric, and was largely influenced by Dylan and Hendrix. Morello promoted this album on The Late Show with Craig Ferguson and on Late Night with Conan O’Brien before heading out on “The Fabled City Tour.” This was an eighteen-stop tour that gave the album quite a promotion.

The Nightwatchman also released a live album entitled Live at Lime, which came out on December 10th, 2009.

The third Nightwatchman album, World Wide Rebel Songs, came out on August 30, 2011, and it was released under the label of New West Records. Before the album was released, Morello made an EP entitled Union Town on May 17, 2011, and all proceeds of the EP went to benefit The America Votes Labor Unity Fund.

The Nightwatchmen brought a meshing of acoustic folklore and electric rock godliness, and it quickly gained numerous fans around the globe, not just because of the music but for the boldness and political messages it delivered.

The project is still active, and Tom Morello continues to work on the new music, as it is in a way his “pet project” and a way to express himself both lyrically and musically. If you are a fan of Rage of Against the Machine, Audioslave, or any other band or project Morello was part of, we highly recommend that you give the Nightwatchman a chance.