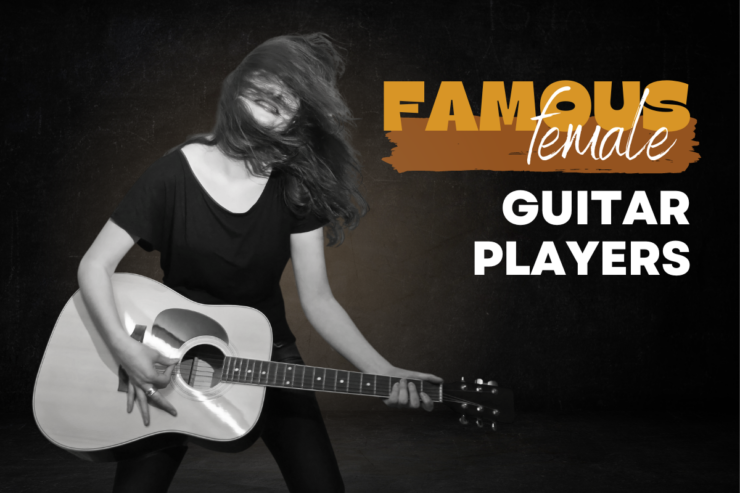 The guitar is undoubtedly among the most popular instruments in the world, and although it might be easy to learn some basic techniques, it is a rather difficult instrument to master. In today’s article, we are going to talk about the ladies who managed to do so – the best female guitarists.

Although when we talk about some great names in the guitar world, we often remember the likes of Eric Clapton, Jimi Hendrix, Tony Iommi, or Eddie Van Halen, there are numerous amazing female guitarists that deserve recognition and to be mentioned among these titans. Today, we will focus on them and provide you with a list of some of the greatest ladies that ever picked up this instrument. We have a lot to cover, so let us start without any delay.

Sister Rosetta Tharpe is certainly a deserving number one on this list, as she is considered the definitive Godmother of Rock ‘n’ Roll. When she moved to New York back in the 1930s, she went to establish herself as one of the most famous blues musicians to this day.

Her creative approach was so good that it inspired some of the greatest names in music, including Chuck Berry, Elvis Presley, Keith Richards, Miranda Lambert, and many, many more. Her style consisted of a unique blend of spiritual lyrics with distorted tones and amazing licks. Sister Rosetta Tharpe’s amazing vocals complemented her guitar style perfectly, making her one of the most prominent figures ever to land her hand on this instrument.

Nancy Wilson was a huge influence in the guitar world with her almost 50-year-long career of excellence. She is an award-winning American guitarist and a co-founder of the rock band Heart, which has been inducted into the Rock and Roll Hall of Fame.

Not only that, she had a fluid and jaw-dropping playing style, but she complimented all of it with her powerful vocals that were often described as “belting.” Some of her most prominent hit songs include “Barracuda,” “Crazy on You,” and “Magic Man,” and one of her most popular albums to this day is “What About Love?”

Even though her name is not particularly famous in modern guitar circles, Peggy Jones was one of the most influential players who laid the foundation for numerous female guitarists. She was born in Harlem in 1940, and although she started as a dancer, she taught herself to play the guitar when she was 15 and quickly fell in love with the instrument.

Jones began recording with Bo Diddley in 1957 and was a huge contributor to some of the most famous songs, including “Aztec,” which she wrote and played the guitar on. Although she was known as Lady Bo on stage, Jones kept her sense of independence and eventually formed her own group called The Jewels after she left Bo Diddley in 1961.

Bonnie Raitt is a famous American singer, songwriter, and guitarist who has been active in the music industry for over five decades. She enjoyed touring with her customized Fender Strat and was highly dominant and influential across the fields of country, rock, and blues.

Her slide guitar playing is not her only signature, as she also possesses an incredibly soulful vocal style. Over the course of her successful career, Bonnie released 18 studio albums and has won 14 awards for her different achievements in the music industry. Some of her most famous hit songs include “I Can’t Make You Love Me,” “Something to Talk About,” “Nick of Time,” and many more.

Joni Mitchell is certainly one of the most iconic female guitar players in the history of modern music. She overcame numerous adversities to become revered in music circles and a living legend. Her songs often reflected social and philosophical ideals as well as her feelings about romance, womanhood, and joy.

Mitchell is widely known for her compelling lyrics, excellent vocals, and imaginative guitar play. Her complex songwriting inspired numerous popular artists, including Bob Dylan, Prince, Bjork, and Taylor Swift, who often named her as one of their major career influences.

If you are a huge Michael Jackson fan, then you certainly saw or heard of Jennifer Batten. Her two-handed tapping technique and incredible shredding skills have earned her countless fans across the globe, and much deservingly so.

Her exceptional technical and imaginative playing during Michael Jackson’s tours throughout the 80s and 90s gained her huge popularity, not just in the United States but across the globe. After these tours, Jennifer played alongside legendary Jeff Beck, with whom she recorded and toured from 1999 to 2001. When she does not shred her guitar, Batten is busy writing music books and creating imaginative steampunk art with her own Etsy shop.

Joan Jett is a rock singer, songwriter, and guitarist from the United States. She made a name for herself for her work with the rock band The Runaways and her famous solo hits such as “I Love Rock ‘N’ Roll” and “Bad Reputation.”

Jett has been active in the music industry since the 1970s, and numerous people consider her to be one of the pioneers of punk rock. Throughout her rich and successful career, Joan has released numerous albums and toured extensively as a solo artist. Aside from being an amazing guitar player, she is a huge advocate for animal rights and has been a vegetarian since the 1980s.

Often called the Queen of Shredding by her numerous fans, Nita Strauss is widely known for her cooperation with the legendary Alice Cooper and her former association with the tribute band called The Iron Maidens. Aside from all of that, she has been very successful as a solo artist too.

Strauss navigated the length of the fretboard with such grace and technique, and it was an absolute joy to watch her play every time she stepped on the stage. Her fluid and explosive shredding were melodic yet very dynamic. She is also a well-known guitar maker and Ibanez’s first female signature artist.

Lianne La Havas stormed the scene in the early 2010s with her incredible technique and exceptional blend of neo-soul, jazz, and alt-folk. Her vocals are an excellent combination with her gently-picked jazz guitar, and her recording was always spot-on, which earned her numerous fans.

Years into her career, Lianne stayed true to her influences, but she also continues to move toward a more jazz-focused and groovy sound. One of the greater examples of the development of her style is her 2020 single titled “Bittersweet,” which perfectly captures the direction in which she is moving towards.

Viv Albertine is an iconic lead guitarist of The Slits and is one of the female pioneers of this craft. Her unique technique and style left a huge mark on the scene and made her one of the best female guitarists in history.

For Viv, playing the guitar is a symbol of individual expression, which truly showed throughout her rich career. She was a key figure in the 1970s punk scene and was the on/off girlfriend of Mick Jones from the band Clash. With The Slits, she has three studio releases behind her, while as a solo artist, she had an album called “The Vermilion Border,” which came out in 2012.

We hope you enjoyed our list of the top ten female guitarists of all time. There are numerous ladies that left their marks on the music scene, and it was rather difficult to pick only ten. However, our list is filled with some great names, and we hope it will inspire you to polish your craft and perhaps pick up and play guitar if you never did it before.